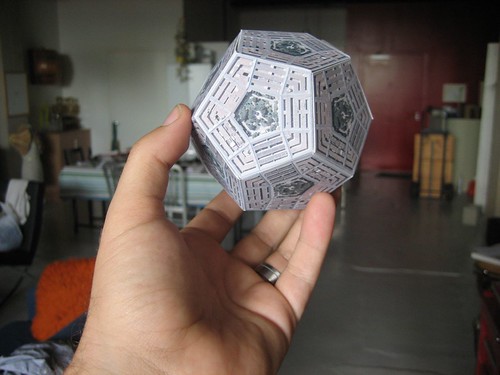 A paper Pentagon faced Dodecahedron. Phase two of this Specter of War project I am starting – sort of like a mash-up of the US Military-Industrial complex and the Death Star. Video to come. 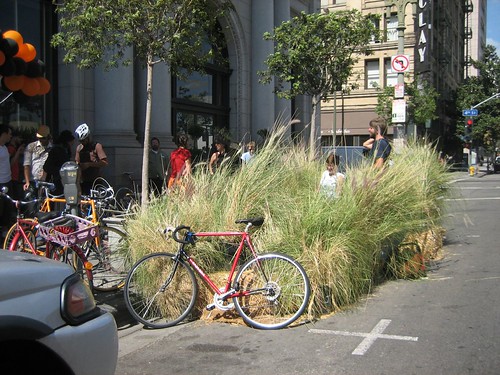 I put some photos up from Parking Day LA this past weekend, Michele and I biked to som of the locations within a few miles of our place.
Check them out on the Rise Flickr page. 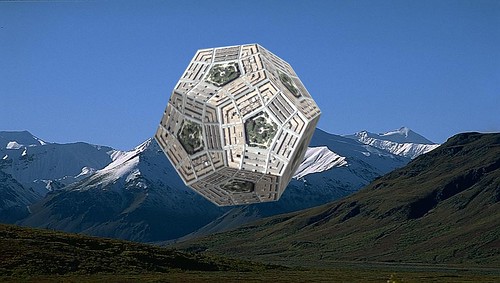 Geometric life affirmation of the week:

When life hands you Pentagons,

Coudal is having a little contest where you send ’em a link to a photo of your desk and they just might send you something. Do a search on Flickr, and a bunch of desks will pop up. Mine’s here. Well my work desk anyway. Home one is a bit more interesting, but that’s not where I am at the moment. Where’s yours?

Tonight Michele and I are going to see Sinead O’Connor at the Orpheum theater in downtown LA. The Orpheum has recently been restored to its neo-classical glory, and from the photos and panoramas up online, it looks like a hell of a venue. Oh, its also just a short Dash Bus trip across downtown from the Rise Industries studios. Its one of the many, many cool things about downtown Los Angeles finally becoming something of a desirable place for people to live and go out in.

My show at Gallery 825 opened Friday. If you missed the opening you have ’till Oct. 5th to check it out, please do and let me know what you think. The work is very personal, and the first things I’ve made alone in the studio for a long time. On the wall behind my desk is a list of questions about my work that I was asked to write during my last year in grad school (almost 8 years ago). One of the questions is “if my work is becoming more about interaction, participation, exchange, interdependence, how can I make work only in the isolation of my studio?” So now that I have completed a body of work that requires a more traditional level of engagement with the viewer I am eager to move on to new projects and address this question again. Lately I have been talking about relational or dialogical practices with other artists (Tim and his MEWS-PARI, Adam and his untitled private encounter, Art as Excuse series). I guess I have been off and on working in this genre for years, without always having the terminology to talk about it. Last year I read Conversation Pieces, and know I should read Relational Aesthetics. Anyway, I thought about it again today after receiving an email announcement from PICA about their TBA festival and following a link to Mammalian Diving Reflex, a performance troupe in Toronto that engages in interactions with the public under the guise of entertainment, just as our brunch with Adam last weekend was under the guise of, or “excuse” as Art. So for those of you interested in these practices, take a look at MDR’s Social Acupuncture series. I’m especially fond of the work they are doing with kids.

Also last night most galleries in LA had openings. Jeremy and I couldn’t possibly get to them all, but managed to make it to a few. Chris Jordan’s show at Paul Kopeikin Gallery, Ruben Ochoa’s and Mickalene Thomas’ shows at Susanne Vielmetter Los Angeles Projects and Alexis Weidig’s show at Overtones are all worth spending time with.