MTV has launched a web site archive of ALL their videos. ALL. THEIR. VIDEOS. Oh crap. Takes me back to the early 80s when they launched and were the biggest thing ever for a while.

Here is my favorite video, or rather, one of my faves. New Order are like scientists, cooking up this song in the studio so intently they look bored.

So here's an inspirational quote for you….

“…the lack of significant opportunities on the West Coast for the support and presentation of art music made composers…more likely to embrace underground, experimental aesthetics. Since the audience was so diffuse, and opportunities for careers so futile, why not spend one’s efforts following the potential of fantastic ideas, rather than worrying about the practical applications of those ideas…?”

–Chris Brown, in “At a distance: precursers to art and activism on the internet.”

“Houses are getting cheaper and cheaper…” 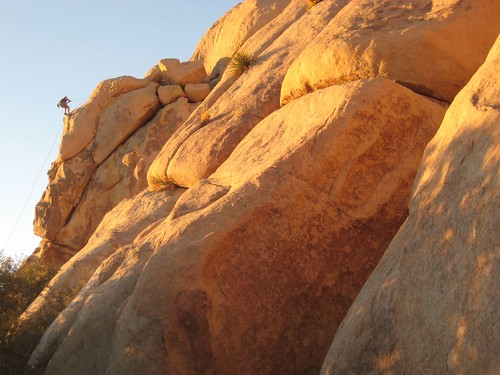 A set of photos from our recent trip out to Joshua Tree for some camping and rock climbing. Its super nice out there in October. Drew is an internetting force to be reckoned with, I reckon. Natalee Dee is too though.

Two things in the media!

Last night, Dr. Doreen Granpeesheh was on KOCE here in Los Angeles, talking about her work at the Center for Autism and Related Disorders and the documentary “Recovered, Journeys through the Autism Spectrum and Back” that she and Michele Jaquis made together. They even showed a clip from “Recovered…” – it was so strange to see Michele’s work on the television, and to hear me and Mike’s music on it. Surreal.

Also! Today Italian design website Europaconcorsi published the Liner competition entry that I worked on at PMA. Check out the project on their site, as well as some of the other entries that are online so far.

A hard day at work

Wulfmorgenthaler on Bush coming home from a hard day at the office.

Is Alaska the new Texas?

Oh. Also read everything else he has ever written. Especially House of Wigs.