For those who don’t get to experience earthquakes, here is how it works:
You are sitting at your desk at the office when it feels like your chair has slid back a little bit. A slightly drunken sensation begins, an oscillation of the floor much like being on a ship in waves large enough to rock it. This is when it dawns on you that an earthquake is occurring. Everything seems a little wrong, disturbing, yet not entirely unpleasant. The ground is rolling, but you know the ground is not supposed to do that, so your brain fights the sensation. You get a little dizzy, again like being slightly drunk. If it’s still going on at this point (just a few seconds into it) then you are amazed that it’s still happening. It’s actually hard to tell when it stops, as now your head is spinning a bit and confounding the sensation. You contact loved ones to make sure its not worse where they are and that they are fine. Immediately someone looks up the USGS (which many people out here have bookmarked) website to see how big and where it was. The one that just shook us up, leaving me still a bit dazed and wobbly, was a 5.8 out in Chino. So there you go.
If one happens right under your feet, or is bigger, or both – then the sensation is bound to be quite a bit more violent. I have yet to feel one of those, and am just fine skipping that particular experience altogether. 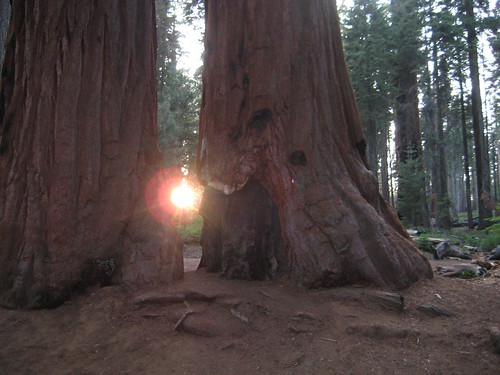 3 national parks visited, 55 to go. Its 4 down, 54 to go. Michele corrected me. We have been to:
Hawaii Volcanoes National Park
Joshua Tree National Park
Sequoia National Park
Yosemite National Park
and Pu’uhonua O Honaunau National Historical Park – but that one is not in the list of 58 that I am working against.

Check out a ton of photos from our recent Sequoia trip over at the flickr site.

“…But like anything in design, restrictions are necessary. Otherwise I’d be an artist.”

From this interview with designer Erik Spiekermann.
I am always interested in those designers who acknowledge the differences between art and design, especially since so many architects and other designers would like to believe that there is none and they are artists rather than designers.

Design won’t save the world.

Two more short videos for ya.

Blinkers from Jeremy Quinn on Vimeo.

Blinds hang like bangs from Jeremy Quinn on Vimeo.

I have been looking around half-assedly for a new car these days, as mine at 16 years is nearing the end of its useful life (at least for me). Major draws for me are style, power, and MPGs, though not always in that order. Given that, VW’s new concept car, which will go into limited production for 2010, hits all three with an emphasis on the MPG part. 282 to be precise. They are doing a hell of a job dethroning Toyota as the most fuel-efficient car maker. Plus, I still think the Prius is butt-ugly and apparently drives like a golf cart.
If, like me, you can’t wait until 2010 to pay over 30 grand for a two seater, then check out the upcoming Jetta diesel with a rumored 60 mpg on the highway. Its lacking in the style category, but making up for it with mileage.