Last Saturday was the annual performance art extravaganza, Perform Chinatown. It was a long evening, 4pm-midnight. We stayed most of the time, but didn’t see everything, and was I disappointed to miss Karen Finley at Coagula Curatorial, but here’s some highlights of what we did see… 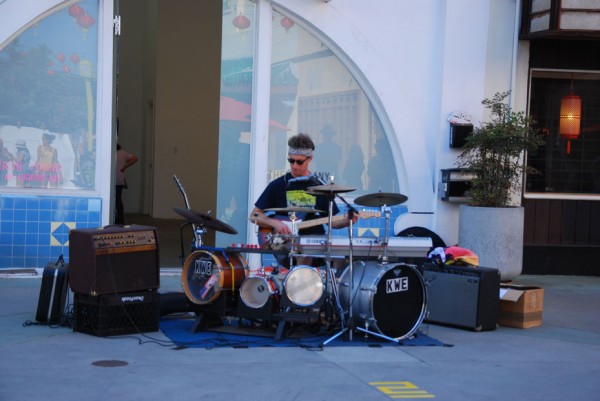 It all started with the amazing one-man band, Keith Walsh Experience. He played for close to two hours, non-stop. Such energy and stamina. 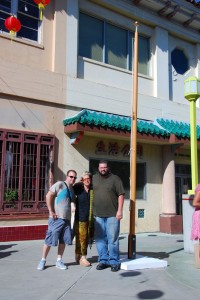 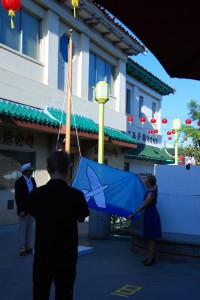 Jeremy J Quinn and Jerri Allyn with Erich Wise and his hand made flag pole, borrowed by McLean Fahnestock for their Flag Raising. 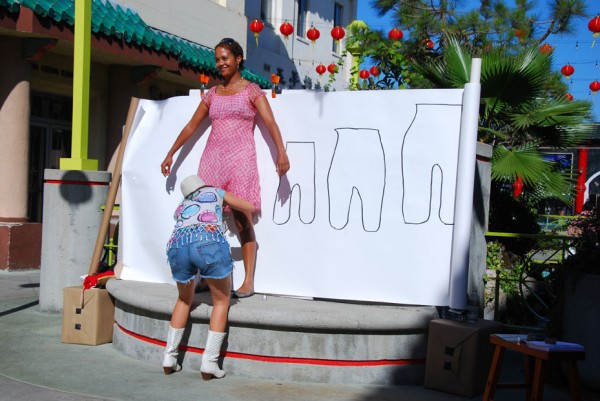 Allie Pohl traced participants bodies onto a large scroll as an index of “The Ideal Woman.” 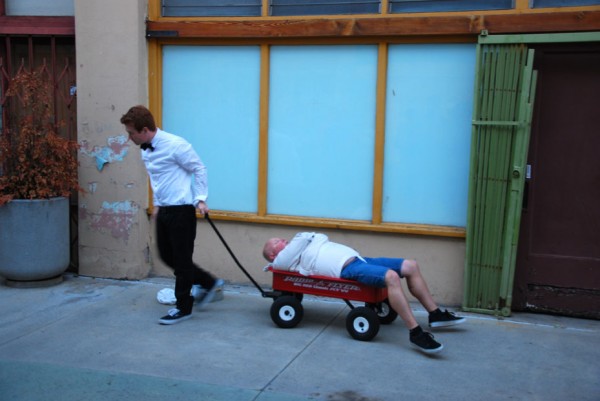 After being shaved and fit into a straight jacket, Kent Anderson Butler was dragged by his barber up and down Chung King Road in a little red wagon. I’m often intrigued by what Kent will put his body through for the sake of art. 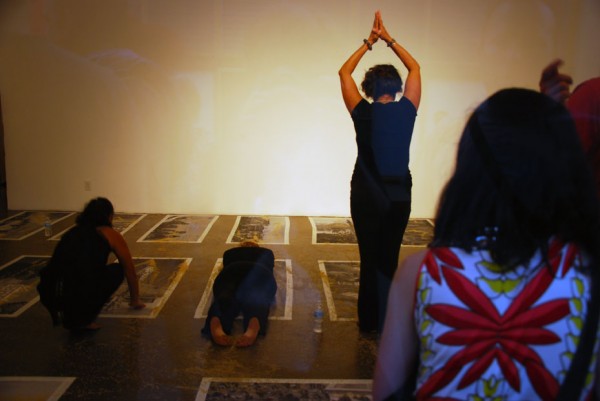 While inside Happy Lion/Mirror Gallery, Jocelyn Foyce led participants in a meditation over rice and black and white images inspired by her travels in Tibet. 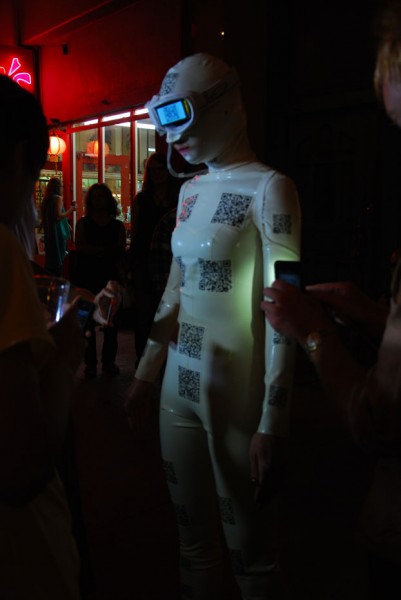 As darkness fell, Tiffany Trenda walked through the growing crowd wearing a skin tight suit that compelled onlookers to pull out their smart phones to scan her with their QR Readers. I’ve never gotten those apps to work properly, so didn’t try it, but according to her website the scanned codes link to “information on the effect of man-made materials have on the human body.” 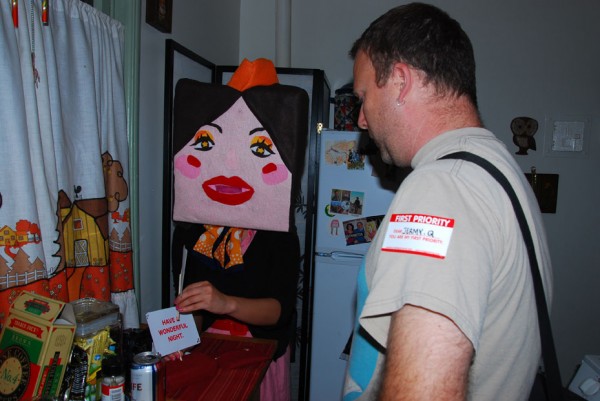 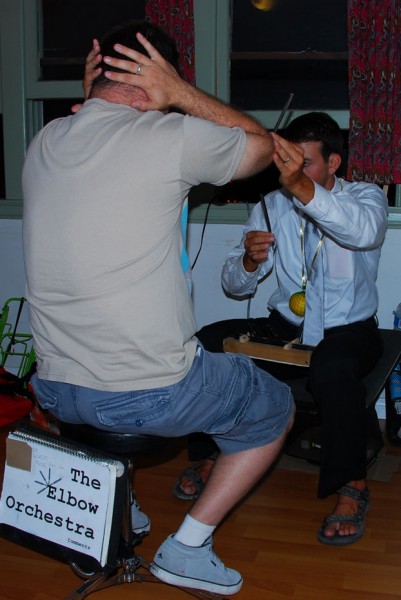 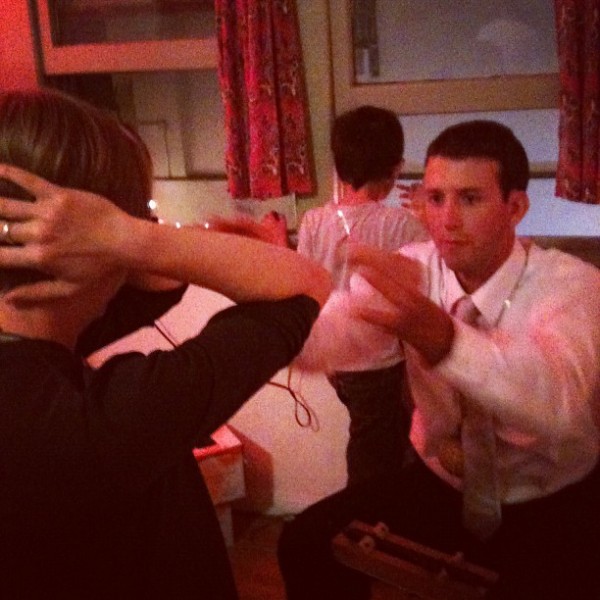 And we both enjoyed listening to tones resonate through our forearms, as James Kennard of the Elbow Orchestra held tuning forks to our elbows, also at Perform Wow! 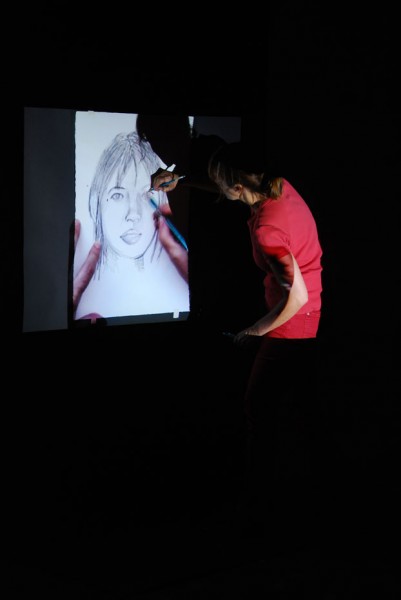 But the most compelling and moving piece was Elizabeth Leister‘s Disapeared. Jeremy and I walked into POVevolving just as she was setting up for her second drawing in an ongoing performance in which she traces the video projection of previously drawn portraits, played in reverse motion so that it appears as if the pencil is erasing the image of a woman. She did this three times, each with a different drawn portrait based on Los Angeles County missing person photos. You’d only know this if you stuck around long enough to hear the video’s voice over recite the missing person’s “vital statistics,” or if you read her project description. Haunting to say the least. 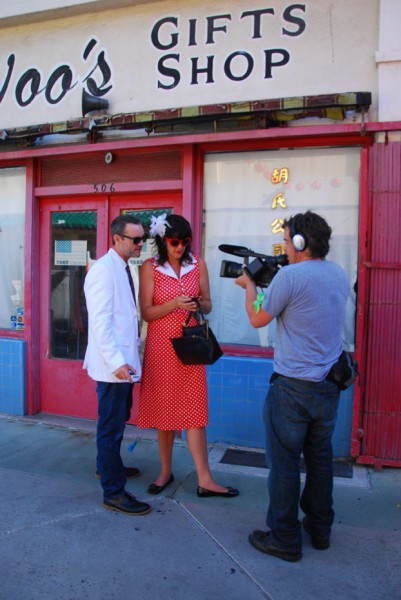 To see more we’ll all have to keep a look out for the video commentary by Dave Burns and Paige Wery, of Artillery. 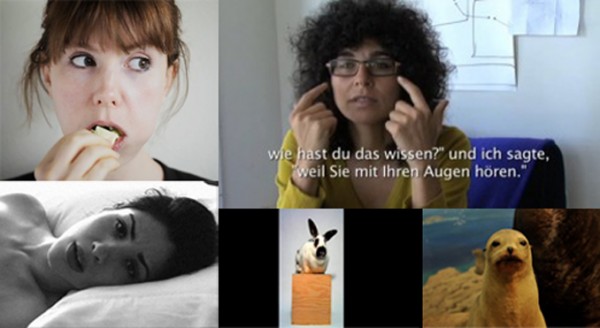