My new video/sound installation, i dream in your language, will be presented at this year’s SoundWalk, “a one-night event of sound installations by over 50 local and international sound artists.” Works are spread throughout the area encompassed by Broadway, Atlantic Avenue, Ocean Boulevard, and Elm Street with a sound corridor on 1st Street that will connect the East Village and Pine Avenue. The art is exhibited in a variety of indoor and outdoor spaces. Mine will be at Phantom Galleries on the southwest corner of 3rd and Elm Ave.

trying to phonetically translate my name into Chinese… 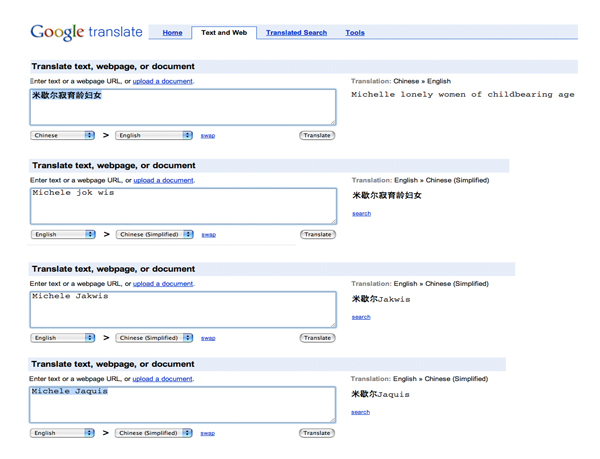 A couple of video clips from Osborn’s Park(ing) day park last week.
I made a little ambient soundtrack of cow noises and crickets and birds so everyone could get a feel for the pasture. I the first video here you can hear it a little bit.

And a few photos for good measure. We had a great time out there, telling people about parking day, and giving out the cow balloons and flowers at the end of the day. The only problem for me was that I didn’t get to bike around LA to check out all the other parks around town. I will have to be satisfied with the summary of this years event on their web site. 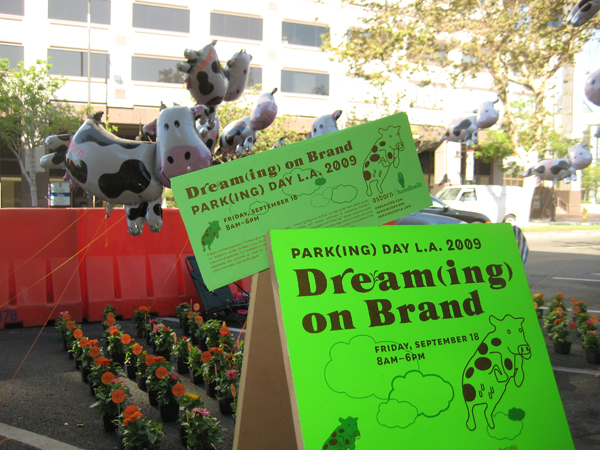 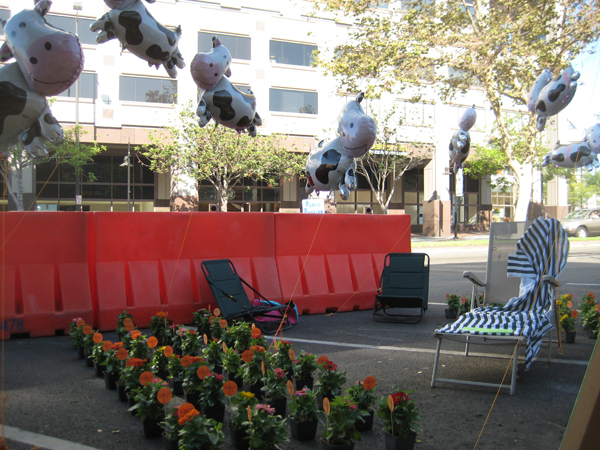 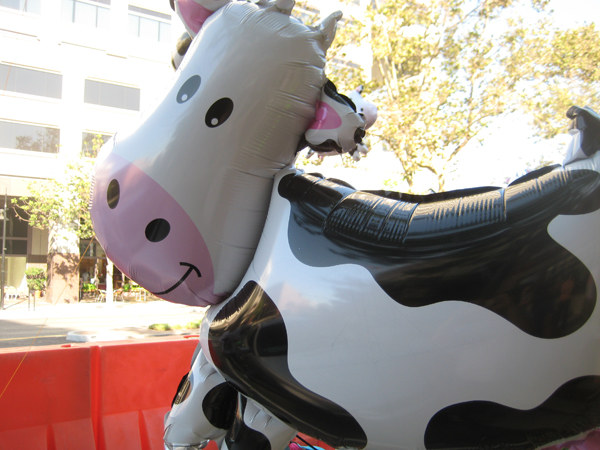 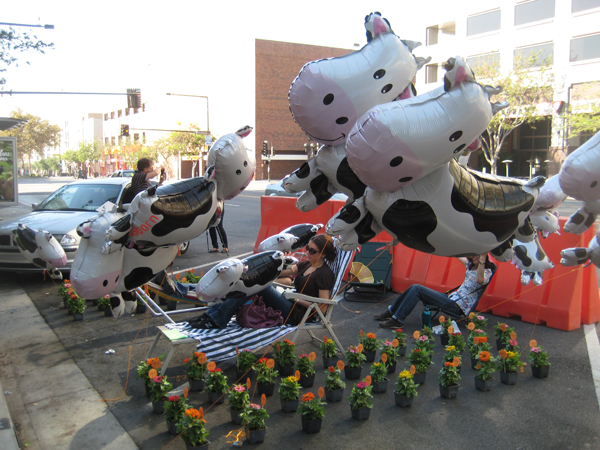 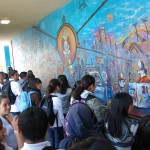 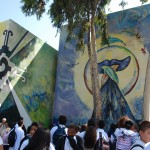 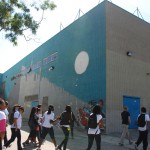 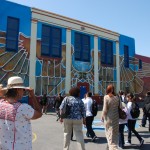 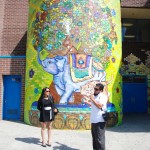 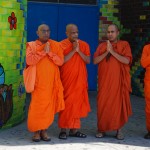 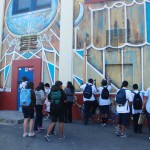 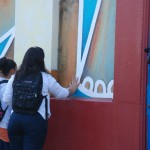 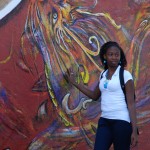 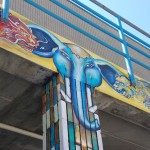 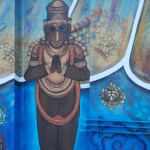 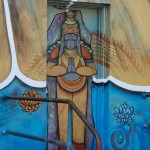 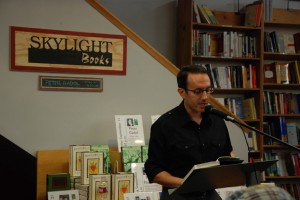 Last Friday, Jeremy and I went to Skylight Books in Los Feliz to hear my office-mate at Otis, Peter Gadol, read from his new book Silver Lake. I know him as the grad writing faculty who often sits at his computer with headphones on, office door shut, preferring the quiet solitude. He probably knows me as the undergrad ACT faculty who’s open door office policy disturbs said solitude. Despite our different office styles, we get along quite well and I was curious to learn more about his professional endeavors outside of Otis. His reading was well attended mostly by friends and fans, including many Otis Liberal Arts and Sciences faculty and both current and former students. I must admit Jeremy and I initially listened with a critical ear to the authenticity of some of Peter’s descriptions of the architectural firm shared by the two main characters in Silver Lake (Jeremy is, after all, an architect himself). However since having bought the book, by the end of chapter two I was hooked, wrapped up into their emotional lives, and couldn’t wait to get home today to continue reading, in order to find out how Carlo really knew Tom and what happens to disrupt his life with Robbie… I’ll leave it at that, as you have to read it for yourself. For now I’ve forced myself to put it down so that I can get back to work in the studio.

Friday Sept, 18th PARK(ing)* Day LA happens once again around Los Angeles. At Osborn we will set up a park on Brand Blvd. in Glendale to dream of a Bucolic Tomorrow – complete with hammock, meadow and cows. Sort of. If you have the time, explore the various parks scattered around town (It makes a great bike excursion) and stop by ours to say hello. Check PARK(ing) day LA’s website and map for more information and locations.

*I do not understand why designers need to break up words with brackets or parenthesis or inappropriate capitalization and I think it’s gotten out of hand.

Drowning In Culture on SCI-Arc

There is a great critique of the recent work of local Los Angeles architectural institution SCI-Arc (the Southern California Institute of Architecture, my alma mater) over at Drowning in Culture. Its a critique I didn’t bother to write, though I had considered it Sunday night, as I felt that my heaping more negativity on the place wasn’t going to do anyone any good. Luckily, over at DIC they are a bit more thoughtful and well-spoken than I and make some excellent points about the direction of work at SCI-Arc as well as contextualizing the situation they have gotten into a bit. They also don’t really pull any punches or shy away from placing blame either.

Over the past few years the work has been exceptionally questionable in both its mission and educational scope, leaving behind any kind of critical discourse in favor of the droll world of affect and computational representation…

There isn’t much hope for the school so as long as it’s director, Eric Owen Moss is still at the helm. Moss has made a mockery of the long-touted revolutionary philosophy once present at the school by first alienating it’s more competent instructors to the point where all but the most dedicated faculty left for other institutions, and then by appointing a succession of supplicants who appear unwilling to make provocative decisions with regard to its curriculum.

While I was again disappointed by the Graduate level thesis presentations, I also attended the undergrad level thesis earlier this year, and at the time was actually impressed with the fact that those students were proposing viable buildings and delivering plans, sections, and models actually descriptive of the architectural features of the project at hand. The work was well crafted to boot. The trend toward digital/computational form and embellishment was still there, but it was starting to be applied towards the creation of spaces that had a semblance of use, structure, and service reminiscent of the requirements of building. I am not sure what is generating this schism between the two programs (where their end products used to be indistinguishable from each other) but perhaps those mentoring the graduates should take note of their peers ability to develop more holistic proposals, moving beyond the merely digital and bringing it back towards the physical realities of building.

Some guy named Max took the Beastie Boys album Check Your Head (historically important to my youth around that high school time period), jammed two or more tracks together in a blender, worked some magic with timing and duration and editing, and spat out Doublecheck Your Head. Its a worthy update of the original, and that’s saying alot.

I have re-built the Rise Industries website from the ground up, and moved it over to a new domain and a new blog publisher. Please check it out at:

Update your bookmarks, and tell all yer pals, and do all that moved website stuff that you do.