I finally edited the video footage I shot of this past year’s Vivarium installation at the Southern California Institute of Architecture. The Vivarium is an installation by Matter Management exploring biology, technology and mythology in a complex architectural and multi-media environment. I developed the sound design for the project, which involved inventing a system to monitor the biology in the black pyramid and to use that data to both generate and modify audio signals. The sound included audio amplified from the biology itself, sounds I had previously recorded, and sounds generated by software using the data captured. I developed the data system using Max/MSP.

For more information on my sound design process, see my previous post Sound from Diagrams and The Vivarium.

For all of you out there that didn’t get to see the play Meditations: Eva Hesse that Michele and I worked on this past fall (doing video design and set design, respectively) – I just finished editing a short video that documents the performance at Highways Performance Space. The video also features the director David Watkins, the actress Heather Tyler (who played “Dying Eva”), and the playwright Marcie Begleiter discussing the work and the process in making it.

For more info on the play see Meditations: Eva Hesse.

For my second print in the letterpress class I have been taking over at Otis, I wanted to work with Guilloché patterns – those complex geometric patterns used on currency and other documents for increased security against forgery. I looked into some different software for creating these mathematically based patterns, but then decided to just see what I could create using Illustrator’s “transform each” tool. I started with a square, rotated that 45 degrees, and then drew some flat, elliptical loops off the end of each point – so now I had a shape that looked like a continuous looping line with a geometrical basis. I simply took that, grouped it, and had “transform each” rotate it a degree or two and move it two points on each step. I repeated that until it ran all the way across the page. This gave me a very satisfactory pattern. I then copied that, flipped it, and nested it under the first line to fill in any white space between them. For the last step, I mirrored this whole thing down, and pushed them together again so there was no empty space between them.
I made sure my lines were all set at a hairline (.25 pt), and stared to work on the text.
For the text, I laid out my quote in a separate file, added some boxes around, then merged all the outlines. I copied out only the white spaces, and dropped those on top of the Guilloché pattern to re-create the text with the linework. 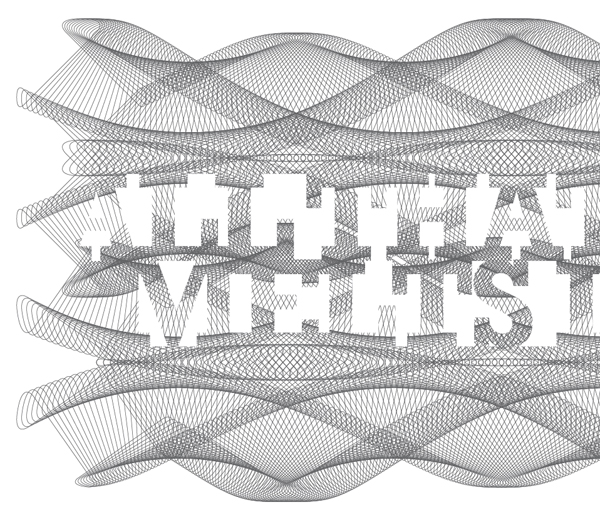 I was pretty happy with that, so I sent it out to get a film made. Gerald from Bieler Press had told me he can do a plate with hairlines no problem, so I had set up the linework with that in mind. I figured this would test my ability to print fine linework pretty well. I picked up the place from Bieler, and it looked perfect. Now all I had to do was print the damn thing.

I got into Lab Press at 2pm. Needed to get the typan changed, and Leslie was kind enough to do that for me. So I started in on cleaning and set-up around 2:30. Got it all together, made myself some ink, and ran my first proof. It actually looked pretty good. Very light, way off center, but the lines were coming in clear! 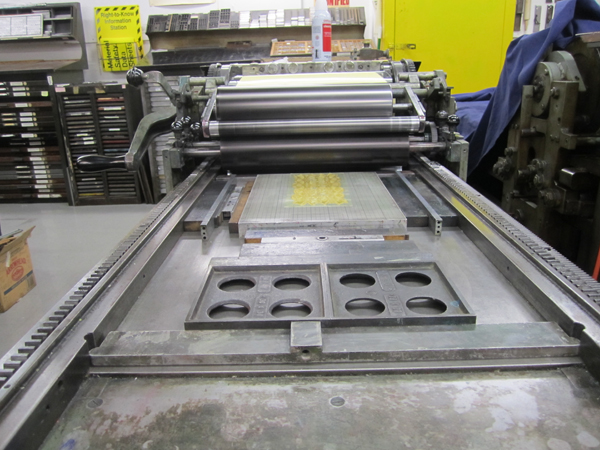 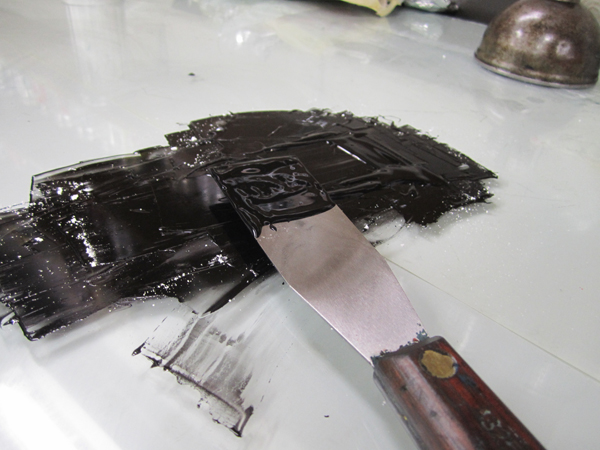 Now I had to locate the print in the right place on the page, get the impression right, get the ink right, and fix any other problems that came up. Seems like every possible problem came up. For some reason, I had a hell of a time getting the right location, I think my simple math and spatial skills were completely off that day. The plate got dirty and needed to be cleaned off. Rollers kept being wrong. Needed more and more impression. The ink dried on the rollers while I was messing with everything else and so I had to clean them all off and re-ink them. It was getting there, then things just started looking bad. This was around 7pm. Five hours in. Gerald told me lower the rollers, and switch out all my packing (the layers of precise thickness paper taped on to the typan to achieve the right impression). The packing was going to be an ordeal so I just ran one more first, to see how it came out. And suddenly, it was good. No idea why. Must have been just the rollers, and needing to work some prints through to get the ink coverage right? I don’t know. But it was good, and it kept being good. Needed some ink now and then, and some finesse with how many times I tripped (ran the rollers over the plate to ink) but I managed to keep it up through the rest of my stack of paper.

So now I have a beautiful stack of these 8-1/2 x 11 prints. Karl Marx quote from the Communist Manifesto over currency/banknote inspired Guilloché pattern. More delicious irony suitable framing and hanging either in the boardroom on Wall Street, or at your local Communist Headquarters – your choice! Will post these up for sale soon on the shop portion of Jeremyjquinn.net so check in there in a few days if you want your very own! 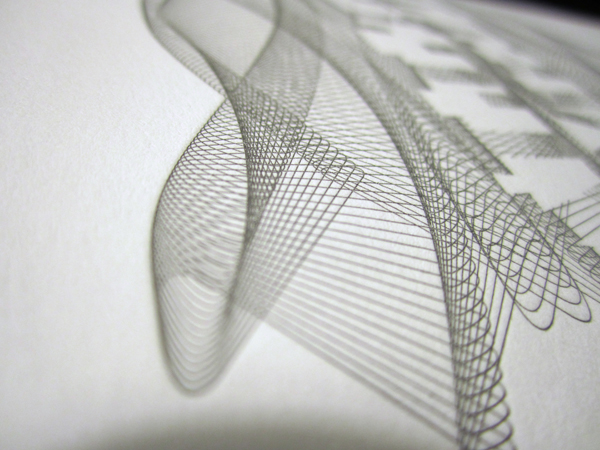 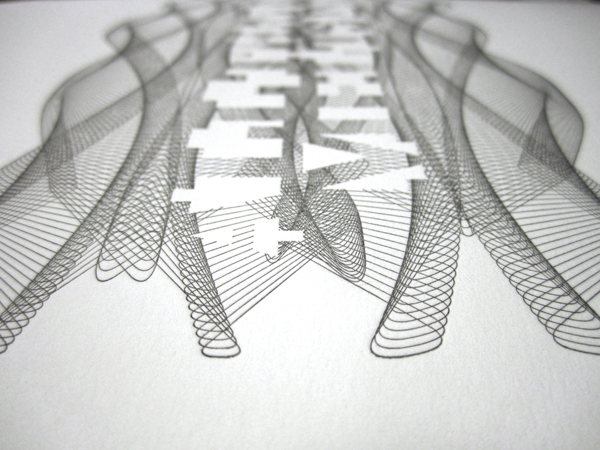 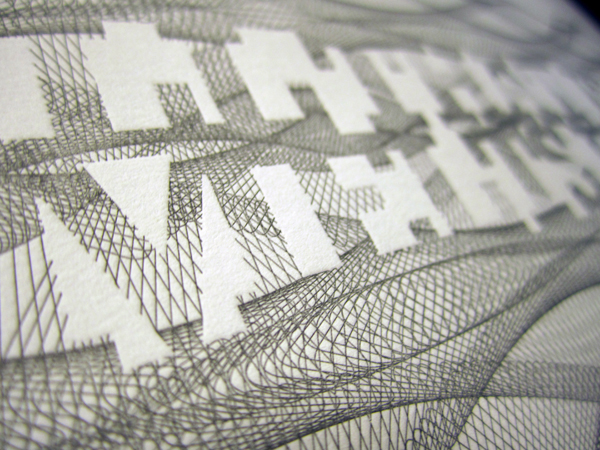 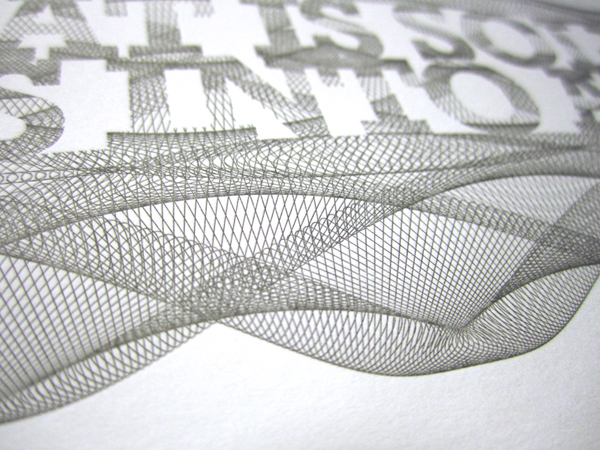 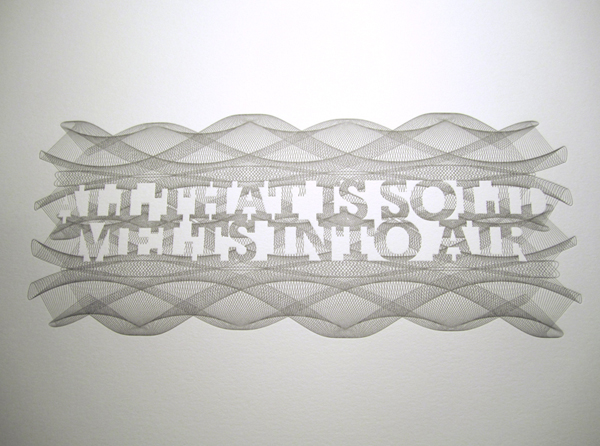 When the official flyer from MOCA cautions that the use of earplugs is strongly recommended, you know something other than a bit of classical music in the park will be going on. This was the situation last weekend down in Los Angeles’ State Historic Park (screw that, I am still calling it The Cornfields) when MOCA organized a re-creation of Iannis Xenakis’ Persepolis, a multi-track experimental music/space/sound composition.
I rolled up late, because I did actually turn back to pick up my earplugs (musicians gotta protect the ears you know), but couldn’t find them. The place was pretty crowded when I got there, and the sun had recently set, so light was fading fast. Walking toward the park, you could hear a low thrum, and I followed the rest of the stragglers into the park. As luck, and most likely insurance riders, would have it, ear plugs were being handed out at a MOCA info table. I plugged em in, and walked into a landscape made of noise, grass, and crowd.
I am not sure I have fully digested this thing yet, but I can say for now that it was an experience, a physical, visual and audio experience on a pretty intense level. I tested pulling the earplugs out from time to time, as I was worried I was missing the highs of the sound. And it was loud, so very very loud. Sometimes bearable and OK, but without warning, a super high pitch would drift in and threaten permanent damage.
I wandered around, as the work sprawls over the park, with speakers on posts set up regularly spaced around the area. There were searchlights and fog machines, at first seemingly doing their own thing, but later working in concert with the sound to create a frenzy of stimuli.
Later there were pillars of fire. There was subtle sound in the giant noise, lots to keep you interested, and enough change to hold me there through the entire duration. It evolved, peaking with the sweeping searchlights, then backing off just a bit to hold for a while before it all simply stopped.
These videos are nothing like it, of course. But, they give you a glimpse into the idea. Sadly, I didn’t catch a shot of the Gold Line train cutting across the edge of the field right behind the huge crowd – which was very surreal.
Well, this is a very disjointed post, but like I say, I have not digested it yet. May write more on it later when I have thought about what exactly made this so spectacular. Or maybe I will keep that to myself.

Last night I ran the first prints of my polymer plate design for the letterpress class I am taking. After a very slow start, things seemed to be going quite well – got the plate located properly, paper aligned, impression good, added some more ink and was ready to go for it, when things started to go badly. First got some bad spots from crap in my ink, then after fixing that, parts of the image started not having enough ink coverage, and other parts looked like they were getting hit too hard. Gerald (the teacher) and I messed with until a half hour past the end of class time, but we just couldn’t fix it. Turns out there was some impression left on the tympan (mylar on the cylinder the paper wraps around) from the last person to print on that press. Rrrrrrr. Ah well, got some decent test prints, and will have to set the whole thing up next week to try it again.

The quote is from Leonardo Da Vinci, and is set in Breathe Pro by Maximiliano R. Sproviero. The overall idea is a nod to Miesien purity countered with Philip Johnson’s snarkiness.

(the images below look great, but after these few almost perfect prints things went downhill and we couldn’t get it back) 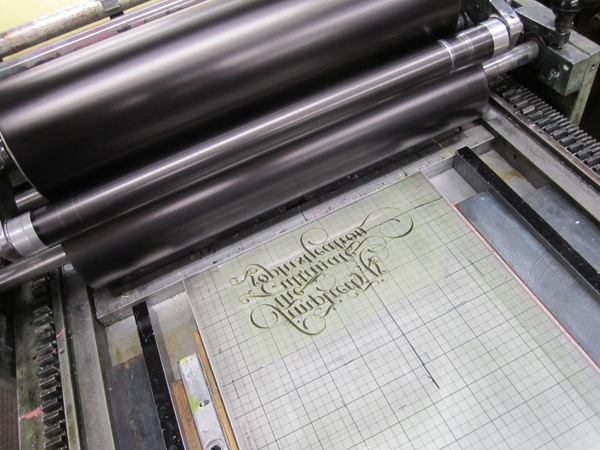 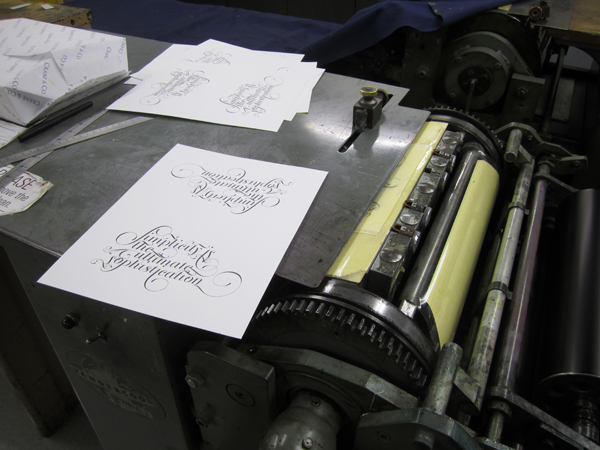 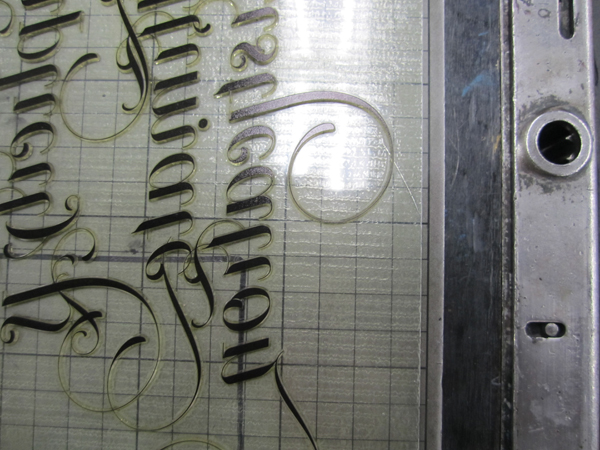 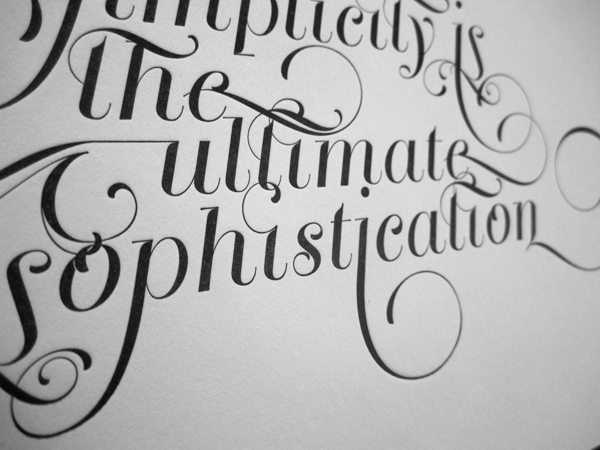 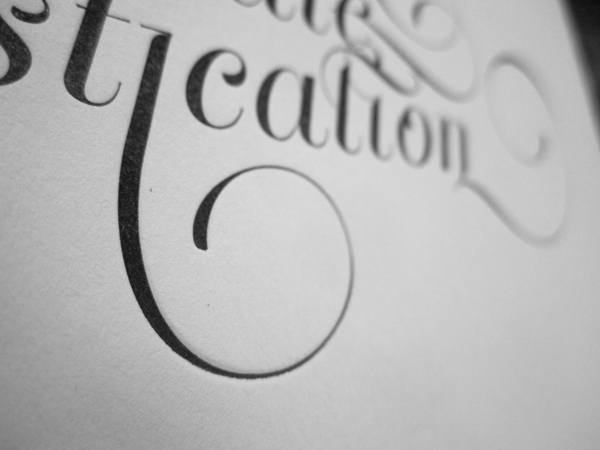 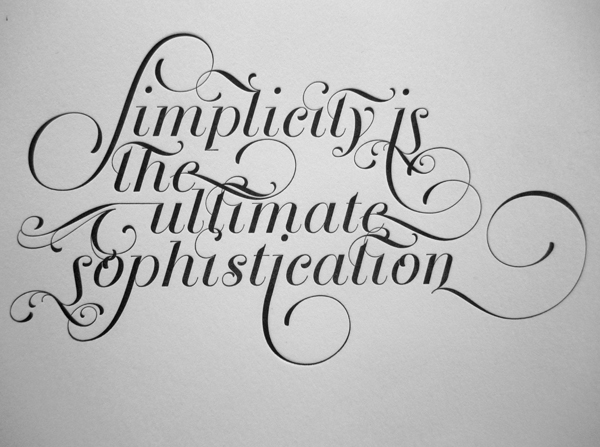 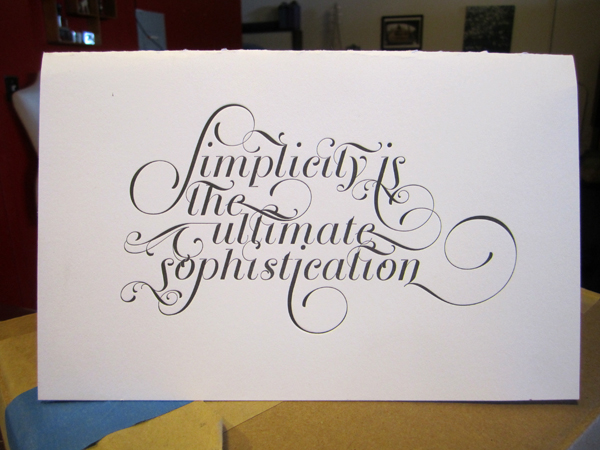 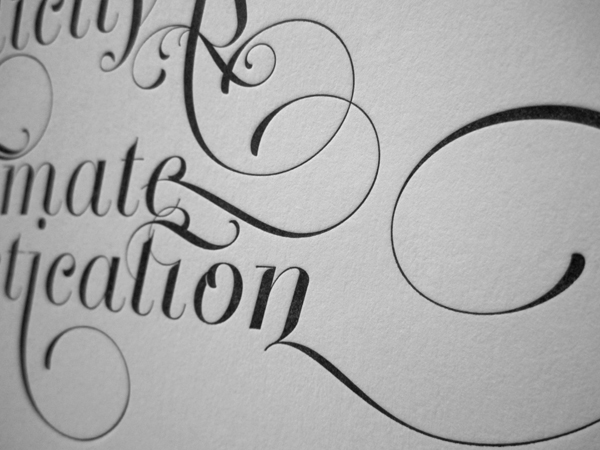