Rise Industries at the Institute of Cultural Inquiry – Day 5

Above is the result of an experiment we carried out at ICI today. We made 3d sterographic portraits! This is one of a sculpture in the garden at ICI.

Jeremy named The Island of the Day Before by Umberto Eco as a book that is influential to the ideas we will work with during the residency. I read the book years ago, and decided to re-read it, beginning on my journey from Boston to LA. I’m struck by the richness of the text, and have been marking passages I plan to excerpt for work at ICI.  The humor, and ideas of parallel experience emerge as I read. Jeremy, Michele and I are busy with the work of collaborating, unearthing an archive, making interdisciplinary work, and planning an exhibition,  simultaneously, and I can’t speak for them, but I am glad to have this text at my side to ground my thoughts and ideas.

We’ve received virtual visitation in the form of art work from fellow Risers Nicole Jaquis and Tim Devin today! Nicole sent two very striking documentary photos of her father visiting Hardiwar India, where Nicole lives. We plan to pair a print of one of the photos, (a shot of Marty, Nicole and Michele’s father,  jet-lagged and asleep ) with an excerpt from The Island of the Day Before.

Tim Devin’s work arrived in the mail this morning. It’s a project called BBC Broadsides. These are  posters that represent statistical maps with information about Los Angeles demographics and water supply. They will be posted throughout the city. Photos of the posters in the city will be exhibited at the 10/10∆8 Exhibition. More on Tim’s project, another version of which he completed in Boston, can be found here.

This morning at ICI we looked at grammar school film strips on a Dukane film strip projector and decided on a particularly apt frame to include in the exhibition. The film strip, entitled Space Travel A.D. 2000, includes a frame that shows a drawing of a boy on the beach and the caption reads “We know that the world is round, but we seldom sense that it really is.” Michele looks through the film strip titles in their cases below. 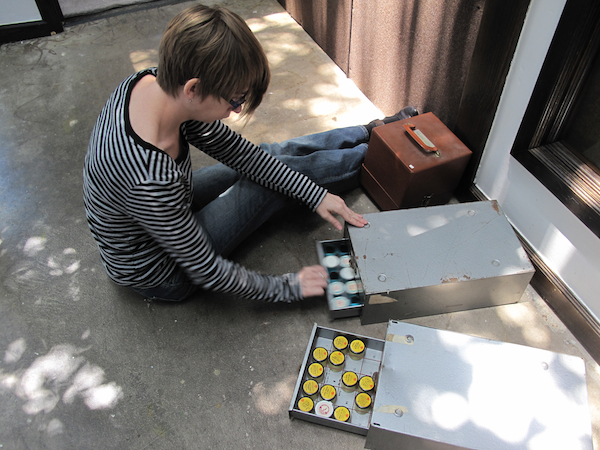