A couple of weeks ago I took a nice bike ride from my place up to Sunset Junction to meet a friend for lunch. Very nice ride by the way, I had forgotten Sunset has a bike lane, so I didn’t actually feel like my life was in danger the whole way there. Anyway, on the way home I came down Second Street and came across the nice new pocket park (I guess you’d call it? Lawn?) on the south side of the brand spanking new Los Angeles Police Department headquarters building. The new building is by AECOM (used to be DMJM, but maybe they found that acronym to not be corporate sounding enough?) and is really surprisingly pretty fantastic. I don’t mean surprising for AECOM, corporate joking aside they do some pretty great work and I know some talented designers who work there, but surprising to me that the headquarters for the LAPD could come out just so damn nice and open and become a part of the urban fabric so smoothly. Of course, the biggest thing is the landscaping, and the conscious choice to give the public the south lawn as the aforementioned mini-park. So now there is this great little lawn on Second Street that I totally want to play croquet on, and the rest of the site is well developed and meticulously planted. Maybe the police will take Rise Industries up on a game or two? I will try to overlook the use of decomposed granite on the upper levels instead of concrete in order to defeat skateboarding on those sweet stairs and handrails. I guess all building developers will always hate skateboarders.
I can see that this building is an exercise in trying to revamp LAPD’s image, to give downtown a very open, transparent building with inviting grounds and hope that the message translates to the organization it houses. If so, we will see how that goes. It’s certainly a great gesture. Also on site is a series of dark bronze, abstracted animal-ish sculptures by Peter Shelton which were the topic of some controversy last month. Apparently Chief Bratton hates them… as does LA Times writer Steve Lopez. I was particularly fond of them myself, especially in the context of downtown LA. Head over there and take a look for yourself though, as they read better all lined up as a kind of progression. Then chill out with a book on the new lawn, maybe some good LA Noir like Raymond Chandler or something, right? 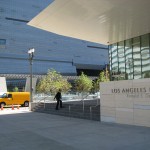 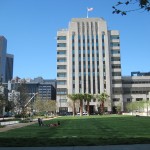 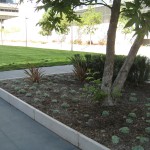 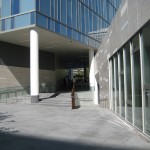 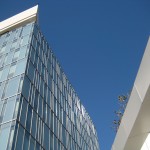 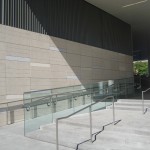 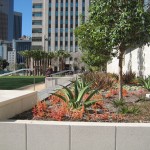 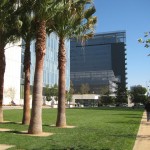 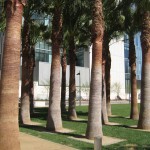 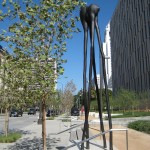 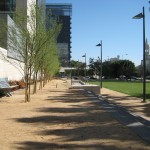 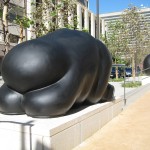 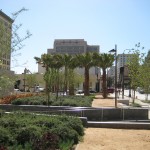 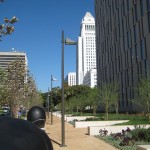 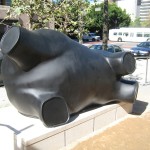 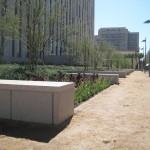 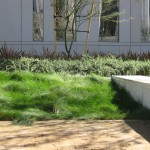 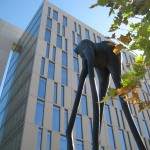 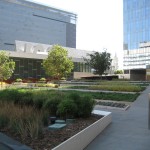 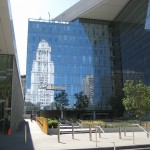