A woman walks down the aisle of the grocery store. She is followed by three other women. They are wearing matching wigs, and singing about the things the first woman is buying.

In a gray, padded cubicle, an office worker opens up a corporate-looking envelope. In it is a formal letter urging him to submerge an enclosed capsule in hot water, so see which “exciting safari animal” it will turn into.

Welcome to the nutty world of artistic interventions into daily routines.

For “Backup” (2008-ongoing), Felicity Fenton hires anonymous women she finds on Craigslist. For the first performance, three of these women accompanied her while she shopped for groceries. The women wore matching wigs, and sang about Fenton’s purchases. “Strange men whistled,” Fenton tells me over email, “some people ducked out of the way (due to the cameras) and lots of people continued to go about their daily task like nothing ever happened.” And a security guard told them they had to leave. 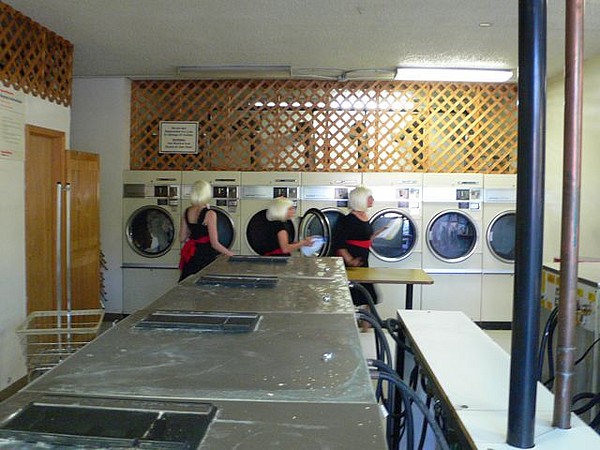 A year later, she performed it again, this time writing lyrics and dance moves for her backup singers, and providing them with matching outfits. When one of the singers cancelled at the last minute, Fenton had to take her place. Now short an audience, Fenton called a friend, and talked him into doing his own laundry while the singers serenaded him instead.

“Performance always cheers me up. It changes the tone of the day — completely. I dedicated a performance to something I usually take for granted…It felt as though I was praising the grocery and laundry gods for an hour.”

Fenton is currently planning a few more performances of the piece. These will most likely involving cleaning her house, and driving in traffic. With backup singers.

“It’s common to feel impatient or bored by things we do every day – brushing teeth, eating, making the bed, laundry, shopping, driving – and all the time it takes to do these things becomes convoluted and lacks presence because we think of the time as useless. But it’s not useless. We have to do these things, so why not find a new way to make them enjoyable? Art does this for me.”

–Chris Barr and the Bureau of Workplace Interruptions–

Groceries and laundry can be boring, but at least you only have to do them once a week. Work, on the other hand, happens a lot more often than that. Luckily, there is Chris Barr’s “Bureau of Workplace Interruptions” (2006-ongoing). Visitors to the Bureau’s website can sign up to have Barr or a volunteer from the Bureau interrupt their work-day.

“You know how receiving flowers at work can put a buzz on the rest of the day?” the website reads. “So do we. That’s why we create surprise, the kind that slices through the banal and opens up new places for your mind to wander. .. [W]e hope to invigorate some of the time you spend at work in order to create new experiences and possibilities outside the flow of capital.” All interruptions are guaranteed to not get you in trouble with your boss, too; the Bureau’s website stresses that their actions won’t be noticed by any of your coworkers.

Most of these interruptions take the form of emails. For instance, one volunteer who goes by the name Agent ChrisTwo invited an office worker to write a rap about his job. ChrisTwo starts him off:

“Yo, Yo, First City Loans is where Jason works,
His work is hard, have’n to give loans all day to jerks,
The office is nice but his cubicle is cramped,
the bathroom is clean but the floor is always damp.

Another volunteer, Agent J, advises an office worker to confess her sins to her coworkers. “Please, don’t feel judged by me; I’m an atheist,” Agent J goes on to explain to the recipient. “We would like to hear back from you, though, to see if this has had any impact on the dynamics of your work-relationships.” Documentation of these and other interruptions are available in a database on the Bureau’s website.

“I think what is important,” Barr tells me over email, “is not just stealing time, but a recognition that contemporary labor utilizes and exhausts our communicative and cognitive functions. So, the important thing to me is to insert non-saleable communications into those channels.”

I also like to interrupt people during their daily grind. My “Everyday Exchange” (2008-ongoing) involves paying visits to participants while they shop for groceries, commute to work, or do their laundry. During this visit, I give people a small work of art I’ve made, or a poem I’ve written, that is specifically about this particular routine of theirs. My visit, and the gift I bring along, are meant to make their routine a little more interesting. 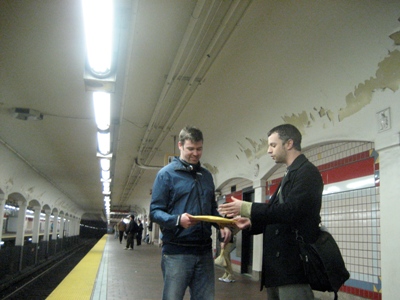 I base these gifts on conversations I have with the participants beforehand. During these conversations, we tell each other about our daily routines. For me, these conversations are the crux of the project. One of the reasons I started the “Everyday Exchange” was to get people to discuss and examine daily routines—both theirs, and someone else’s. I’ve found that no one really talks about these things, because they don’t want to bore anyone. But this reluctance can only cut them off from a number of interesting observations.

Because these routines actually can be very interesting. For example, who else is on the train with you, and what are they doing? (Do they look bored? Bothered? Are they checking each other out?) Or when you go grocery shopping, do you always buy the same things? (Some people do. Others don’t.) Our routines can be very interesting—if only we would pay enough attention to them every once in a while.

I asked Fenton if laundry and shopping were different for her as a result of her project. “Yes!” she told me. “I value those mundane acts more than I did… It’s pretty amazing what happens to the brain when you become microscopically fascinated by things before you.”

“Backup” added a bit of magic to Fenton’s routines. The performances also made the grocery store and laundromat a little more interesting for everyone else around her.

Despite the different agendas behind them, each of these three pieces produces a similar result: a blip of surprise, or wonder, in an environment usually fuelled only by boredom.