Some art around Culver City… 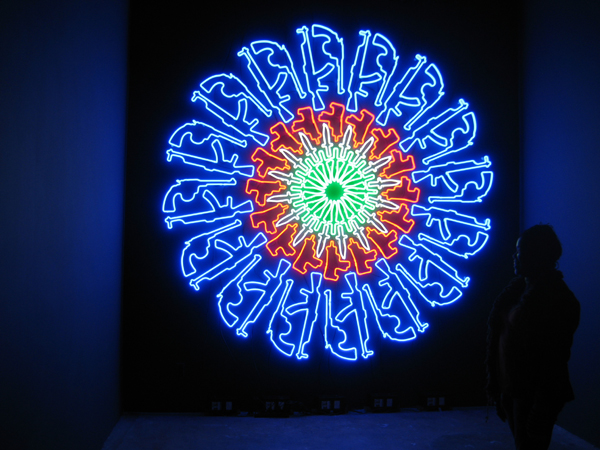 Last weekend Michele and I met up with our friend Roz to check out some of the work showing over in Culver City. A bunch of spaces were open late Saturday in concert with the LA Contemporary Art Fair across town in the Pacific Design Center. We managed to find some great stuff here and there, like the above neon wall piece, ChakrAK-47 by Artemio at LAXART.

At Honor Fraser we were confronted with Gustavo Godoy’s Fast-Formal Object: Big White. The installation is a seemingly random construction of various lumber, dowels, stamped sheet materials and concrete, painted white with its own lights built into it. It reads as a playful study of form, light and shadow, very architectural but also very drawing based, as many of the elements read like various line strokes. With a small platform inside and ramp leading it, it also gives off a constructivist playhouse vibe that keeps the whole thing from getting too serious. We stuck around for a gallery talk on this one, but I found I liked the work much better before I heard the artist talk about it. 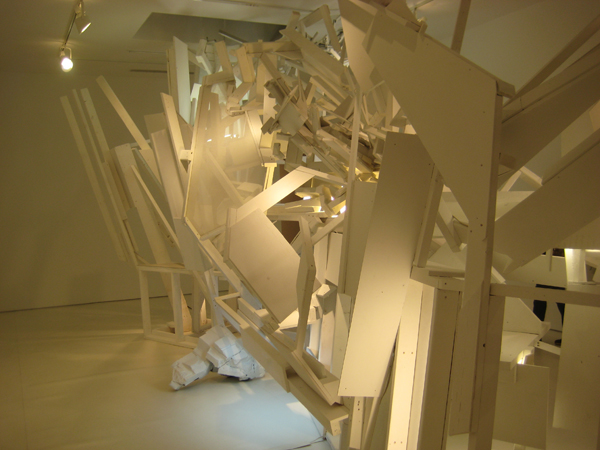 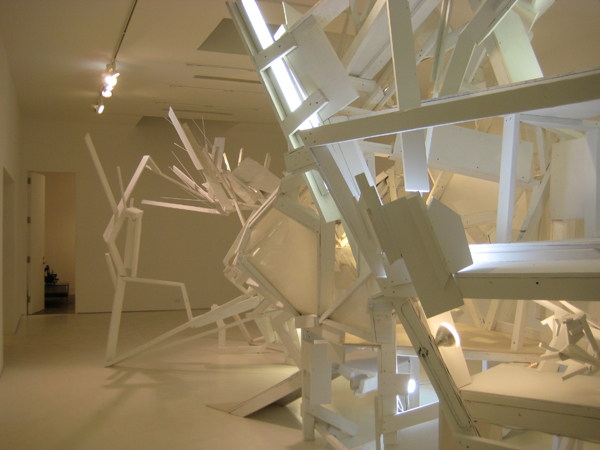 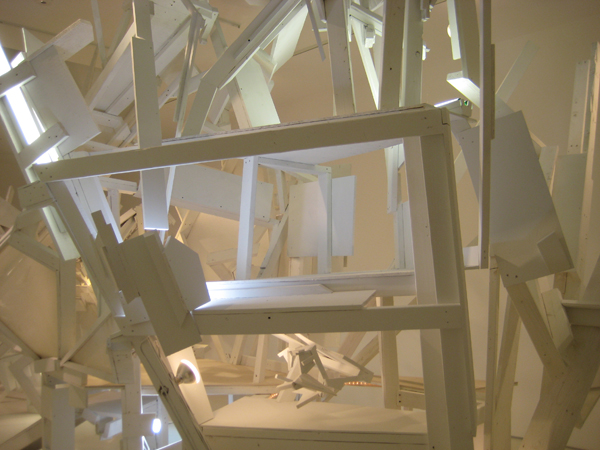 Also at Honor Fraser was a projected video piece by Fabien Giraud and Raphael Siboni in which teams of armed combatants battled among a landscape of movable black objects (much like large pedestals or gallery dividers) and theatrical smoke. The groups, costumed as a military contingent, prisoners in orange jumpsuits, civilians, rap-gangstas, and zombies (?) in medical garb (am I missing any? perhaps there were some terrorists too?) played like video game characters brought to life. They ran towards each other across the space, clicking paint ball guns at each other (no added sound effects) and dying by the dozens. Each shot was a continuous tracking shot across the space, gliding smoothly by on rails, starting from the right hand side every time as the groups went through their maneuvers. This one is part of Lab’s inaugural exhibition VideoRoam, a series curated by Paul Young. Lab is a sort of side project of Honor Fraser, “a forum for the explorations of the arts community in and outside of the Los Angeles area beyond the existing gallery program”. 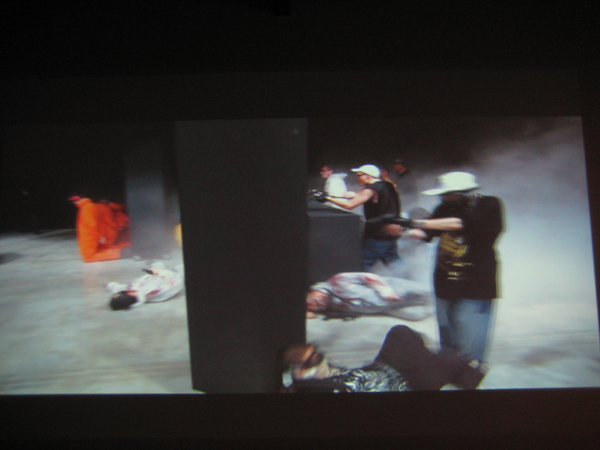 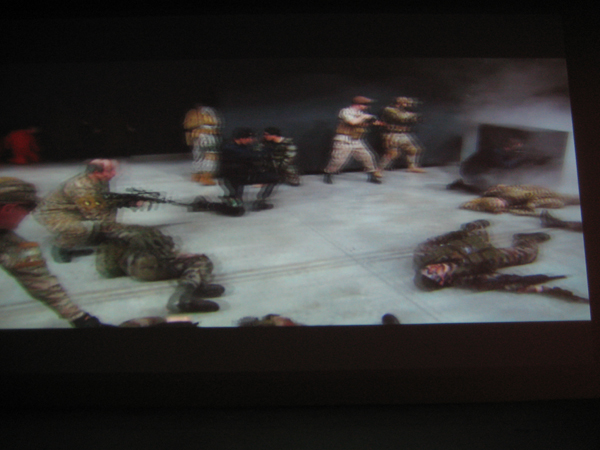 Finally, down at Angles Gallery, among paintings I didn’t care for at all, we found this little gem of a wall sculpture by Tom LaDuke – a delicate little bit of twig somehow mirrored as if hanging above the surface of a still pond. Around the corner from this, a vertically oriented video proved to be the highlight of our tour. In crisp HD, a still life with hanging bird, grapes, water and plaster wall turns out to be a super-slow-motion shot of the bird simply dropping into the water below. The details of the feathers, the water splashing out into droplets, the sheen of the grapes, recalled old master’s still life painting – and more recently Bill Violas interpretations of the master’s at his Getty residency – but still managed to stay in itself a captivating work.
(hm. I didn’t write down the name of the video artist and now I can’t find it on their website.. same for the above projection. What is it with galleries snubbing the video artists on their websites? Unless I am just missing something) 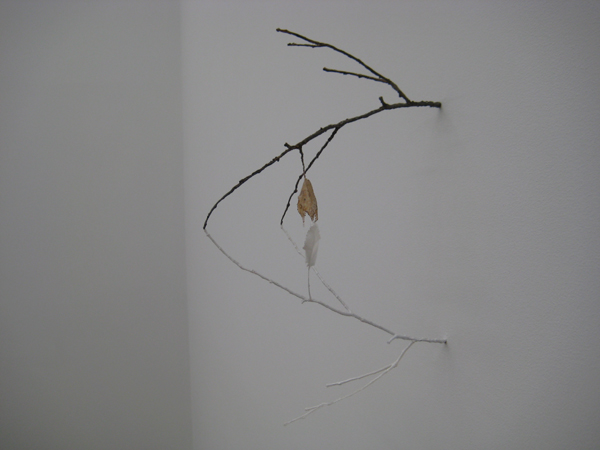 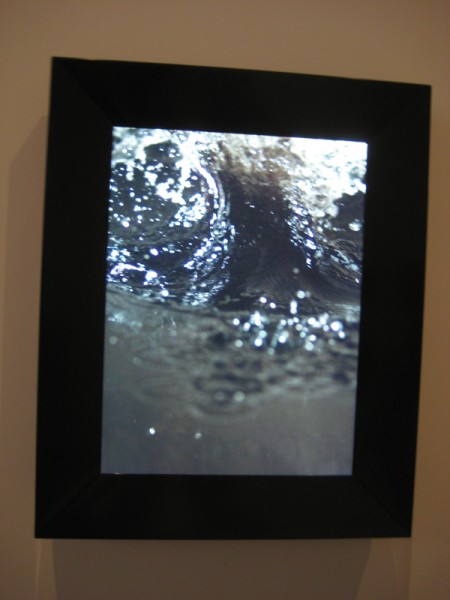 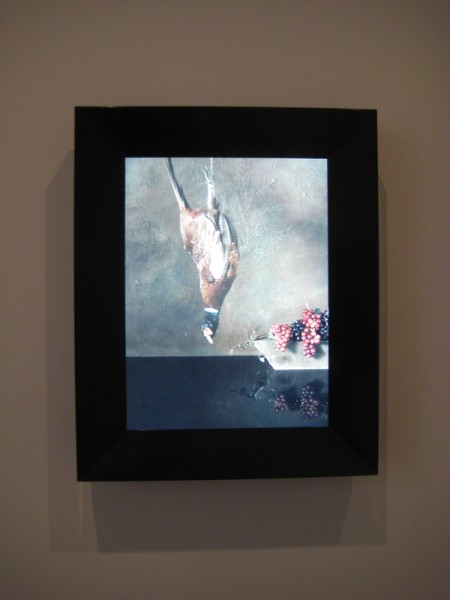